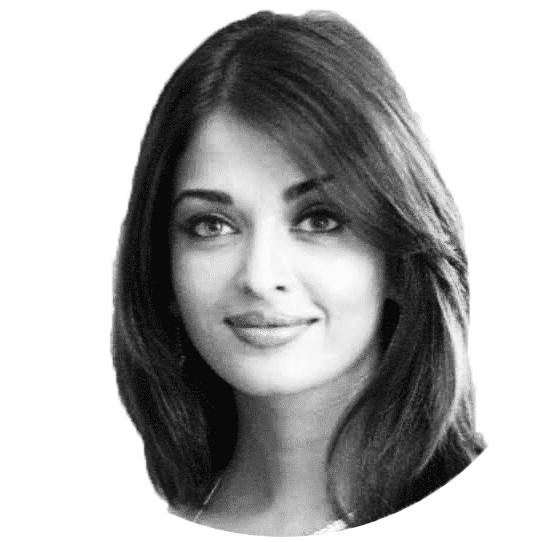 Life will take its toll on all of us. We get injured, we get old. It's really sad to try to run away from these harsh realities of life. Looks are not everything. I am not going to look beautiful all the time.

Aishwarya Rai Bachchan, often cited as the "most beautiful woman in the world" whose trademark are her green-blue eyes and ultra-feminine mannerisms, is an Indian actress and former model. After winning Miss World in 1994, she successful established a career in Bollywood and is one of the most popular and high-profile celebrities in India. Rai gained international recognition for her starring role opposite Martin Henderson in Gurinder Chadha's British film Bride and Prejudice (2004) a Bollywood-style adaptation of Jane Austen's novel Pride and Prejudice. Below is Aishwayria Rai's sacred feminine, goddess mythology natal chart interpretation by Astrology Yard.

Aishwarya Rai is a deeply religious Hindu from the Brunt community. Her father, Krishnaraj, was an Army biologist and her mother Brinda, a homemaker and her elder brother, Aditya Rai an engineer in the merchant navy. She was raised in Mumbai and trained in classical dance and music for five years during her teens and eventully gave up her education to pursue a career in modelling. On 20 April 2007, Aishwari Rai married the Indian film actor Amitabh Bachchan's son, Kuch Naa Kaho, Abhishek Bachchan. They have a daughter named Aaradhya Bachchan who was born in March 2012.

Order your own comprehensive and personalized goddess mythology report & get delivered to inbox within 24 hours of order placement! 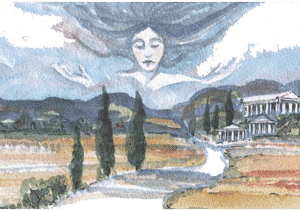 Mythology serves as a psychological record of human development recording the imagination and symbols of the culture. Mythic stories speak to the inner life as they deal with universal themes and truths illustrating the archetypal forces that influence the course of the human drama. In archaic societies myths offered an explanation of the world and its creation, the cycle of birth, growth and death, how things came into existence as well as how they disappeared. In contemporary times we have scientific explanations for many of the ancient mysteries, but myth is just as valuable to help us to imagine our own origins and invest our lives with meaning. Mythic themes stir the imagination and broaden the horizon of the individual's story placing it in a context of a larger story. Mythology is the link between the magical phase of being when consciousness participates in nature and the rational phase when we are separated from the natural world. The magical phase embraces the culture of the Great Goddess when life is full of mystery and wonder and we are one with the natural order, not separated or expelled from it. In this phase all nature is sacred as all life is invested with the divine. The asteroids are surrogates of the Great Goddess and reconnect us to her culture. As emissaries the asteroid goddesses and heroines invest life with the sacred, value imagination and mystery and inspire ritual and sacrifice in order to reconnect to the wellsprings of her magical forces. Following is a summary of their genealogy and mythic tradition. Let the myths resonate with your imagination and speak to you in their own way. The Roman goddess Ceres is also known as Olympian goddess, Demeter. She is the daughter of the Titan Cronus and Rhea and mother of Persephone. She is the Corn Goddess who personifies the agricultural cycle of fertility and harvest, as well as loss and renewal through her daughter Persephone. The Olympian goddess Pallas Athena was a daughter of Zeus, born from her father's head after he had swallowed Metis. The Romans referred to her as Minerva. She is revered as representing the wisdom of reflection and strategy. The Roman goddess Juno is also known as the Olympian goddess, Hera. She is the daughter of the Titan Cronus and Rhea and mother to Ares, Hephaestus and Hebe. She is the goddess of Marriage and Social Customs who oversees the seasons of a woman's life. The Roman goddess Vesta is also known as the Olympian Goddess Hestia. She is the daughter of the Titan Cronus and Rhea and is the goddess of the Hearth who embodies sacred space. Hygieia was the daughter of the Greek god of healing, Asclepius and the beloved goddess of Health. She is the sister of other minor healing deities and heroes including Panacea, Machaon and Podalirius. As the goddess of Health, Hygieia is the giver and preserver of well being whose function is to maintain a healthy relationship between body and soul. The Cretan goddess Ariadne was from the Minoan dynasty. She is the daughter of King Minos and Queen Pasiphaë, granddaughter of Helios and Zeus. She is sister of Phaedra and half-sister to the Minotaur. As the wife of Dionysus, Ariadne embodies the sacred marriage having endured the trials of betrayal and abandonment. Europa was a Phoenician princess, sister to Cadmus and matriarch of the Minoan dynasty, mother to King Minos and grandmother of Ariadne and Phaedra. She represents the creative and earthy process that supports and guides worldly success. Pandora was the first woman, shaped by Hephaestus, to be the harbinger of a new age. She was married to Epimetheus and was the mother of Pyrrha. As a representative of the ancient ways of the goddess, Pandora brings the gift of hope. Mnemosyne was a Titaness, a daughter of Gaia and Uranus, known as the goddess who personified the faculty of memory. As the mother to the Nine Muses she represents enchantment, inspiration and the power of remembering. The goddess Hecate was the daughter of Perses and Asteria, the granddaughter of Phoebe, and a powerful goddess revered by all the gods. Later she became an attendant to Persephone. As an underworld goddess she was represented in her three-fold nature and was worshipped at the crossroads and as the guardian of transitions. Cassandra was the daughter of Priam and Hecuba, the regents of the powerful dynasty of Troy. She was the twin sister to Helenus and sister to seventeen other siblings including Paris and Hector. From an early age she had oracular ability, yet no one believed her. Cassandra carries the feminine mysteries of divination even in a contemporary world that devalues the sacred tradition. Medea was the Princess of Colchis, granddaughter of the Sun god, Helios and niece of the sorceress, Circe. Medea is the great witch of the Greek myths, knowledgeable in herbs, healing and the art of metamorphosis. 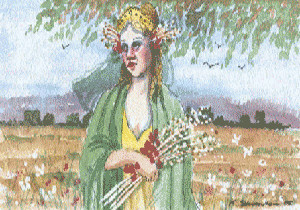 Pallas Athena - The Wisdom Of The Warrior 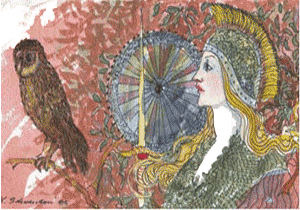 I celebrate the powers of Pallas Athena, the protectress of the city: Dread, as Ares, She busies herself with the works of war, With the sack of cities, with the battle-cry and with the combats. It is She who saves the fighters that go to war and come back alive. Hail, Goddess, give us good fortune and happiness Pallas 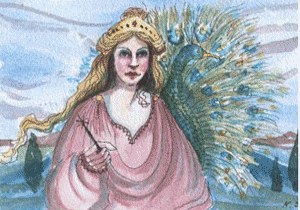 And wheresoever we went, like Juno's swans, Still we went coupled and separable 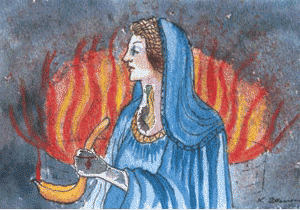 Hygieia - The Soul Of Health 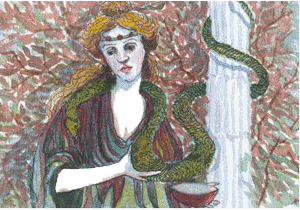 Ariadne - The Labyrinth Of The Soul 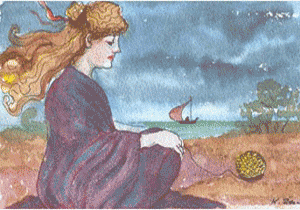 Health, greatest of all the blessed gods, may I live with you for the rest of my life

Europa - The Soul Of The Earth 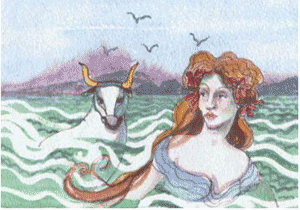 On a beach in Sidon a bull was aping a lover's coo. It was Zeus. He shuddered, the way he did when a gadfly got him. But this time it was a sweet shuddering. Eros was lifting a girl onto his back: Europa

The Marriage of Cadmus and Harmony

Pandora - A Gift Of Hope 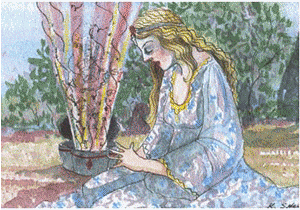 Hope sole remain'd within, nor took her flight, Beneath the vessel's verge conceal'd from light

Mnemosyne - The Soul Of Memory 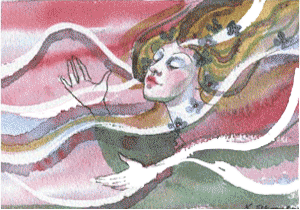 Thou fill'st from the wingèd chalice of the soul Thy lamp, O Memory, fire-wingèd to its goal

Hecate - The Soul In Transition 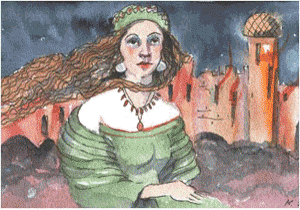 Thou fill'st from the wingèd chalice of the soul Thy lamp, O Memory, fire-wingèd to its goal. 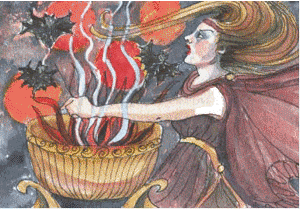 Of all things upon earth that bleed and grow, A herb most bruised is woman 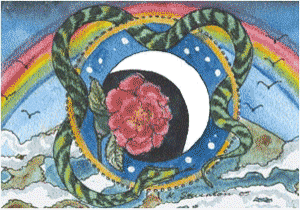 Of all things upon earth that bleed and grow, A herb most bruised is woman

When using this report, please bear in mind that, inevitably, every chart will contain some contradictory influences.Usually it is the responsibility of an astrologer to synthesize these apparent contradictions in order to present a cohesive and meaningful interpretation of the dilemmas of the chart. Please also be aware of the fact that each person has positive and negative influences in the chart, and therefore in their lives. The challenge is to accept and overcome the negative influences, so that we can successfully focus on the positive traits. This report outlines both influences, and therefore parts may be difficult to accept. Any advice given is meant to be an aid to people taking responsibility for their own lives. The ultimate decision rests with each individual. The authors and publisher accept no liability for any adverse effects of this report. This report is meant more of an introduction to the wonders of the asteroid goddesses rather than a complete course in its intricacies. Further studies, or a consultation with a professional astrologer, are encouraged to explore this most ancient scientific and philosophic tool. We hope that you will discover a common thread that gently winds its way through the 12 Goddess placements in your chart, a thread that inspires you to continue to follow your dreams and discover the Goddess or God within.
Top

The Birth Planets of Aishwayria

The Birth Aspects of Aishwayria